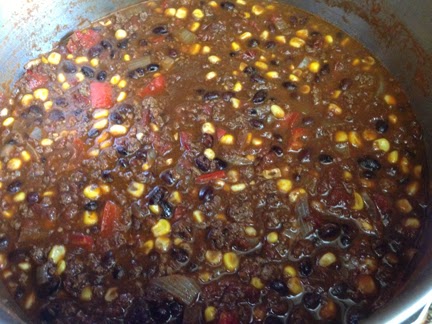 Back in 2008, we and a friend from Chicago decided to enter a local Chili Cook-off competition. She proposed a recipe calling for black beans that she had used. We entered this chili under the title of "Down-on-the-Farm Urban Chili" - tipping our hats to her as an urban girl, and us "down on the farm".

I've had a jones going for some chili for a few weeks, so I dug out the recipe. I was charmed again when making it when I added the heaping tablespoons of dark cocoa by the the rich color and the aroma that bloomed while stirring it into the base. 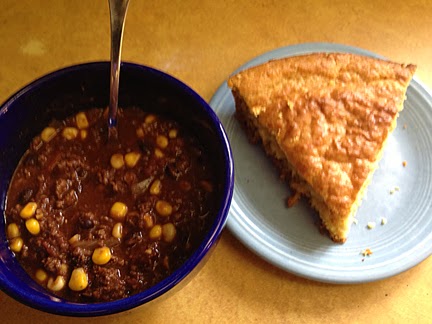 Here is the recipe we shared with people who asked for it in the competition, and I've annotated a couple of things. We did not win (or place), because many people shied away from  even sampling our chili . . . it was a "chili must be red and filled with red beans" kind of crowd, I think! But, we like it (I personally dislike red kidney beans and prefer black beans!). Here's the link to the recipe for Cornbread also, which is excellent!

Down-on-the-Farm Urban Chili
This is the original recipe for the chili that was scaled up for the Coopersville Outhouse Race Chili Cookoff on February 23, 2008.
This original recipe makes just under a gallon.

In a large pot, toast sliced garlic in oil. Remove and set aside.
In same pot, in oil from garlic, brown beef (if you use hamburger instead of sirloin you may need drain liquid from the beef in order to get it to brown) with half the onion.
Add 3/4 beer and zest and juice of 1/2 lime; simmer.
Add pureed chipotles to taste (note that we generally put in all the chipotles, but we only used about a third when we made the batch for the Coopersville Chili Cookoff). Add salt, cumin, chili powder, cocoa, and toasted garlic. Cook until liquid almost absorbed.
Add remaining beer, remaining zest, remaining lime juice, remaining onions, tomatoes, beans, red pepper. Simmer just until red pepper no is longer crisp.
When ready to serve, add frozen corn and chopped cilantro. Stir just until corn warm.
Serve.