December 08, 2013
Well, this post is only a little over a week late - we've had so much going on, haven't had time to recap some new Thanksgiving goodies! Between out-of-town family around all weekend and a Holiday Market I went to with some of my cards and calendars, it was pretty hectic.

On Thursday, with one side of the family, we brought the Fall Harvest Salad again, as it was greatly acclaimed and completely devoured last year. Then, as a potato dish, Darrell had found this Mashed Potato Casserole recipe which is so simple and SOOO good - the crusty parmesan/panko topping really made it wonderful, and the cream cheese instead of milk rendered it ultra creamy. My one change was to use Redskin potatoes, as that's what we had on hand.

I made the potato casserole Thursday morning while he worked on the dessert, which was a berry/apple crisp (cranberries and blueberries) with an oatmeal crisp topping, which was served with a home-made ice cream that he created. He had previously made Dolce de Leche from a gallon of fresh milk, made an apple cider reduction with cooked apples in it, and stirred all that goodness through some of his cooked custard French Vanilla ice cream. It was amazing!

Darrell also somehow whipped out a batch of Parker House rolls to take along - the entire kitchen workspace was covered in pots, pans, supplies and food in progress. I actually had to assemble the potato casserole on the kitchen table, darting into the kitchen to put the pot of potatoes on the stove to cook and then getting them drained, while dodging Darrell working on breads and desserts at the same time. Somehow we managed to not have any disasters or major squabbles!

I also made a corn pudding the night before, while getting the salad basics ready, from a recipe my friend Joan had shared:

Corn Pudding Recipe from Joan
2 cups corn
2T flour
1/2 tsp Salt
3T butter
3 eggs
2T sugar
1 3/4 cups Milk
Joan said, "I blend everything but the corn in the blender, then mix in corn and dump in casserole, bake at 325 for 45 minutes. You can also add dried parsley, dried onions, etc., according to your taste."

I (Conni) did not use the blender, but mixed the butter (melted) and the dry ingredients into a roux in a bowl, to which I slowly added and blended the milk, then added the eggs (which, looking back, could have been beaten well before hand, but didn't really matter). Then the corn (frozen corn from our summer garden - so sweet!); and I decided to use a half teaspoon of herbs de provence as a seasoning, before putting it into the baking dish. It was so custardy-creamy with all that sweet corn goodness, and the herbs de provence really added a nice touch.

Additionally, to this Thursday feast, we brought a Butternut Squash casserole - roasted squash, mashed to smoothness with a potato masher with butter, salt, and brown sugar, topped with pecans that had been oven-toasted in a little butter/brown sugar mix. The crispy sweet pecans were a great counterpoint to the creamy mashed squash. This is a great make-ahead dish, too, like the corn pudding. There's only so much craziness our little kitchen will stand on Thanksgiving morning!

Apparently this Thanksgiving we were all into "creamy", as this describes the potatoes, the squash, the corn pudding AND the ice cream dessert! 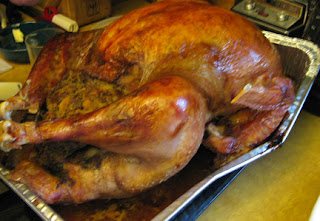 Then on Friday, with the other half of the family, we did a good-sized turkey, stuffed with Darrell's great sausage and sage stuffing, mashed potatoes, garden corn, and pumpkin and mince pies for dessert (with ice cream on the side!). We also had home-made fresh cranberry relish made with oranges and Granny Smith apples, and some home-made apple sauce. The leftover turkey, stuffing, potatoes, gravy went into the Turkey Pot Pies to stock in the freezer for easy winter dinners - so simple to put one in the oven before braving a blizzard to do the chores, returning to have it nearly finished, crusty and piping hot! 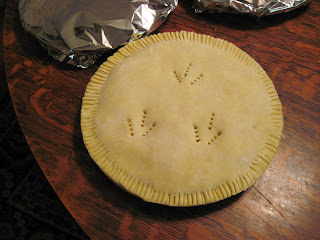 Pot Pies are now safely in the freezer, as I cooked down the carcass for broth, blended all that good pot pie gravy with the broth, potatoes, leftover stuffing and a quart of our home-canned chicken stock. Then I cooked the last of my garden carrots (the lovely, earthy smell of fresh carrots not long out of the ground is so sweet and tantalizing!), cut up the turkey, added some of our frozen corn and some store-bought frozen peas.