Plan ahead for your Thanksgiving Leftovers!

November 14, 2013
This is a post from one of the recipes on our Chicken/Poultry Recipe page - a timely reminder to plan ahead to actually HAVE lots of those yummy leftovers, what to do with them to enjoy a taste of Thanksgiving all winter long, and a little advice on how you can hang on to your leftovers :-). And, should you need lard for that great pie crust, or any pies for the holidays, we have leaf lard available for rendering!

Coach Stop Farm Turkey Pot Pie
(or, what to do with those Thanksgiving leftovers!) 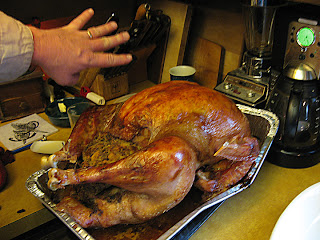 Prep (leading up to Thanksgiving): get a very large, fresh  turkey from a local provider if you can . . . as large a bird as you can fit into your oven. Make your favorite stuffing to fill this bird – make lots of stuffing and bake any extra in a casserole dish. Make mashed potatoes and gravy and corn to match this bird (as if the whole thing will be devoured on Thanksgiving), and then invite as few people to Thanksgiving Dinner as you can get away with and not be drummed from your family.

After the meal, store all leftovers (the gravy, the stuffing, the potatoes, corn, and the meat) until you are ready. However, I find it most efficient to strip the bird and cook down the broth from the carcass immediately, then store the resulting meat and broth.

Strip all turkey meat off the carcass, putting all meat chunks in one pile and bones with scraps on them in another.

Broth:  Put the bones and other scraps into a large pot (the carcass will have lots of flavor from the stuffing, as well as the meat). Cover with water and cook off broth. Strain out bones (I like to do this with a slotted spoon so that I leave flavorful meat and stuffing IN the broth. If you don’t wish to make broth from the carcass, just buy whatever chicken broth you prefer – starter paste, bouillon, canned . . . you may need some of this on hand anyway, when you get to the pot pie mixture part.

The Pot Pie mixture:
In a large pot or mixing bowl, put your leftover turkey (cut into bite-sized chunks), leftover corn, frozen carrots (or cook some carrot slices from fresh until not quite done), frozen peas, and any other veggie you might fancy in a pot pie. Mix up these items and make sure the balance of ingredients looks good to you.

The potatoes and stuffing thicken the liquids (broth and gravy), and add flavor, so that your pot pie gravy is thick and savory.

Using your blender or food processor, blend amounts of the stuffing and potatoes with the broth and/or gravy you have. You want a fairly thick, stew-like consistency so your pot pie filling will not be runny.  Pour your blended gravy over the turkey/veggie mixture you have in your pot. Stir the gravy through thoroughly and evaluate again – too thick? Add a little broth.

So, now you have your filling and can fill up pie shells (2-crust pie - see our recipe below). Use disposable aluminum pie plates and put your bottom crust in, add filling, put on top crust, pierce and seal. We cover the pies with aluminum foil and place them into large freezer bags for freezing. When we want to eat one, we heat the oven to 425 degrees and bake the pie from frozen for about an hour and a half. Loosen the foil cover before placing in the oven, and remove it entirely for the last half hour or so for browning up. When the liquids bubble through the air vents in the top crust, it’s done! Depending on your quantity of leftovers, you should be able to get quite a few pot pies for your freezer.

Mix flour and salt together.

Have lard and butter very cold, cut butter into small pieces, cut both into flour with pastry cutter.  Don’t over blend.  Then, using a fork, toss in water mixture until all the flour is incorporated.  This recipe will make a two crust pie or two single crust pies.  Divide the dough in half, press into disk shape, wrap in plastic wrap and refrigerate until ready to use.  Will keep in the refrigerator for about a week.  If you’re going to make the pie right away, refrigerate for at least an hour before rolling it out.  The key is to keep it cold.
If you are going to bake a pie right away, having it cold will make it flakier.  If you’re blind-baking the crust, refrigerate for an hour before putting the parchment and beans in and baking.

* a note about flour.  I get my best results with this pie crust if I use pastry flour.  You can use all-purpose flour just as well.  It won’t be quite as flakey as with the pastry flour but it will still be an above average pie crust..  I have also used bread flour in a pinch but to keep it from getting a bit tough (because of the extra gluten and protein in the bread flour) you have to have a very light hand and keep everything very cold.  I wouldn’t recommend cake flour as it probably wouldn’t hold together as well but then again, I’ve never tried it.

** Most often I use lard and butter because butter has a bit of water in it that explodes into steam when you put it in the oven and the pie crust is just a little flakier. Also, butter flavor is never a bad thing.  You can use a cup of lard, omitting the butter, and get an excellent crust.  You cannot use a cup of butter, omitting the lard, and end up with a good crust at all.

Using this recipe for Pot Pies:  When we make pot pies, we use the 9 inch tin disposable pie plates that you can get in large quantities at GFS.  We also make large quantities of pot pies.  What I do is double the pie crust recipe, then divide it into 6 pieces, enough for 3 pot pies.  Any more than that and my pastry cutter won’t handle it, not to mention my arms.  If you have a food processor, you can probably cut the fats into the flour with that but I don’t have a food processor so I don’t know that for sure.  When you make 3 pies out of this crust it is just a little thinner, but still enough and you don’t have to make as many crusts.  When you’re faced with 15 to 20 pies and cutting in the fats by hand, thinner gets acceptable pretty quickly  Also, since you’re probably going to freeze these, you can go from mixing the dough to rolling it out without chilling.  It will get cold enough in the freezer.  Just use a light hand and handle the dough as little as possible.  My grandmother would save all the scrap dough from making pies and put it all together to use for the next crust.  I’ve always found that that makes for a tough crust. I just practice my rolling pin skills to make the crust almost exactly the right size and then tuck it together so there aren’t trimmings.
**********