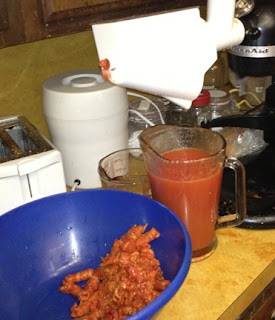 I picked a bunch of tomatoes over the course of a few days, then cooked them down, ran them through the KitchenAid strainer to remove the skins and seeds (in the blue bowl) and got this lovely pulp (in the glass pitcher). Love that strainer attachment!

Darrell then strained that through a cotton bag (pillow case) to get rid of all the extra water, then seasoned it and made 18 pint jars of ketchup from a recipe in an Ohio Amish cookbook. The recipe calls for a huge quantity of pulp, but he recalculated and makes this batch with about 4 1/2 quarts of drained pulp. 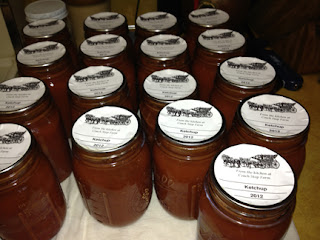 This late in the year, I don't know if I'll get any more tomatoes off our plants - a slight frost caught me off-guard a couple of nights ago - weather forecast said it wouldn't get colder than high 30s, so I didn't cover the plants. Some damage, but probably can pull some tomatoes to ripen in the garage if it ever stops raining. I'd like to can some more tomatoes, or do the same process as with the ketchup, only can the strained pulp as paste - not sure that's going to happen, though!

Can't believe the garden is almost done! Still have beets out there, which I've been pulling, and any we don't get to will go to the hogs. Need to dig the potatoes, but the rain right now is preventing THAT from happening. Still a lot of kale, and pumpkins galore, which he is feeding to the hogs and we are giving to friends with kids for Halloween. We need to can some pumpkin for pies and such, too, so canning isn't done yet!