September 17, 2012
Late spring, when I finally got the garden planted (about 2 -3 weeks later than planned!), I put in 4 broccoli plants. Within a couple of days, some little creature had munched them all down. When I was tilling the garden, little weeds were sprouting in the area they had been in, so I ran across it to clean it up and turned up the little stub that was left of one, still rooted in the soil it had come it. I looked at it and realized there was a little leaf and some green in the stem, so I re-planted it, watered it and watched to see if whatever had decimated the 4 plants came back. That didn't happen, but this little plant was so set back, I figured I would be lucky to get any broccoli off it at all. I looked at it a week ago (early September!), while doing some weeding, and there was no sign of any heads forming, but the plant had grown large and healthy-looking. This Saturday, I re-checked - lo and behold, not one, but TWO nice big heads! Apparently the little surviving stub managed to put out two main stalks (for the uninitiated, you usually get one large head on a stalk, then, after you cut that, the plant continues to produce side stalks and smaller heads until hard frost). Two main stalks on a plant is unusual in my experience. So before cutting these beautiful heads, I had to take a photo. With chicken distribution Saturday and doing tomatoes all day yesterday, I didn't get them cut. You can see the faint yellow where they were getting ready to blossom - pretty tiny little yellow flowers when that happens! 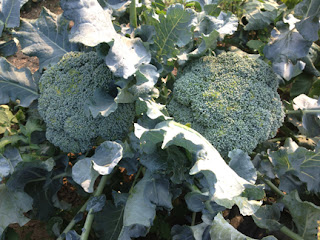