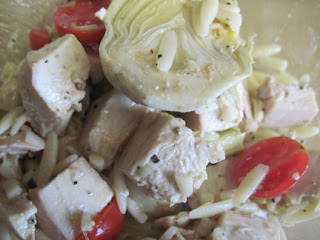 Friends were coming for lunch yesterday. When we first made the plan (it's March in Michigan), I thought "a yummy chicken soup from one of our chickens, along with some homemade French bread, will be just the ticket!" Then, watching the forecast on Monday, I realize the temp will be in the 80s on Wednesday (this was a record-setter for our area!), and that hot soup and warm bread was probably not the way to go. So I re-visited the menu.

Fortunately, my mom collects recipes for me out of the paper, and on Sunday I had gotten the March Dash insert. It had a Mediterranean Chicken Salad recipe than sounded interesting. Of course, being me, I had to alter it some - partly because there are a couple of ingredients that I just don't care for (tarragon and olives) and partly because I didn't have exactly what the recipe asked for, so I substituted. Served on large leaves pulled off a head of Romaine lettuce, this was a wonderfully tasty, cool lunch on a hot day, with some of our home-canned peaches on the side!

6 Tbsp olive oil
2 Tbsp white wine vinegar (I used Balsamic vinegar)
1/2 tsp dried tarragon (I used some dried "herbs de province")
1/2 Tbsp fresh lemon juice (I used the bottled kind, as I'm too Dutch to waste a whole lemon for half a tablespoon)
1/2 Tbsp Dijon mustard (I used yellow, as I don't care for or have Dijon)
1/2 tsp salt
1/4 tsp pepper (I found myself adding a little more pepper while eating, so I would likely increase this next time)
1 (3#) rotisserie chicken, diced (I used the breasts from one of our birds, which I had baked with a citrus blend seasoning on the outside.)
1/2 cup orzo
1 cup halved cherry tomatoes (I used grape tomatoes, because I prefer them)
1 6 oz jar marinated artichoke hearts, drained (I cut them into halves or quarters, depending on size)
1/2 cup coarsely chopped, pitted kalamata olives


2. In a medium bowl, toss chicken with ¼ cup dressing.


3. Boil orzo in a large pot of salted water until just tender but still firm to bite. Drain. Rinse under cold water to cool and drain well.