May 12, 2011
Here in West Michigan we are finally getting spring-like weather . . . everything seems to be running a few weeks behind the norm . . . the swallows came back later than usual, asparagus started coming in a week or two after the norm, garden was too wet to till until last week . . .

However, we had asparagus, some pork loin, and then strawberry shortcake for supper last night. The berries were from 2010 . . . our strawberry patch had to be replanted this year, so we won't be harvesting our own. And the asparagus patch is in serious need of weeding - the aftermath of the tornado last summer totally interfered with available time to keep on top of that, and I think some of the crowns have been choked out and will need to be replaced. 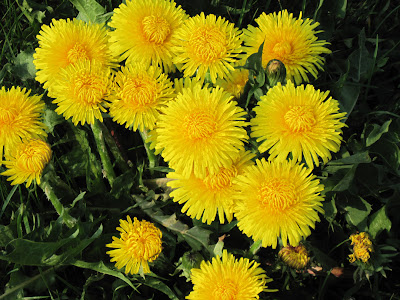 Oh, and spring has also brought the dandelions out in force - I don't believe I have ever seen such healthy, huge flowers - most of these measure at least 2.25" across, and a few are 3" in diameter! Yowza! Wish they stayed pretty like this and didn't end up blowing away, leaving those ugly, naked stalks behind . . . dandelion wine, anyone?